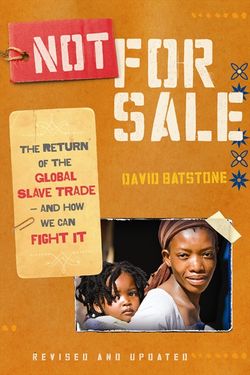 An estimated 27 million people around the globe suffer in situations of forced labor and commercial sexual exploitation from which they cannot free themselves. Trafficking in people has become increasingly transnational in scope, and is today the third most profitable criminal activity in the world. As many as half of all those trafficked worldwide for sex and domestic slavery are children under 18 years of age.

In Not For Sale, David Batstone, a Professor of Ethics at the University of San Francisco, tells the inspiring stories of rescued victims and their heroic rescuers, including background briefings on human trafficking, and practical ideas that empower individuals and their communities to join the campaign for human freedom. Freshman Common Book: Kennesaw State University, University of South Carolina Aiken
Author
David Batstone, Ph.D., is Professor of Ethics at the University of San Francisco. His book Saving the Corporate Soul & (Who Knows?) Maybe Your Own won the prestigious Nautilus Award for Best Business Book in 2004. Batstone also serves as Senior Editor of a business magazine, Worthwhile, and was a cofounder of Business 2.0. Batstone appears regularly in USA Today's Weekend Edition as "America's ethics guru."
Details