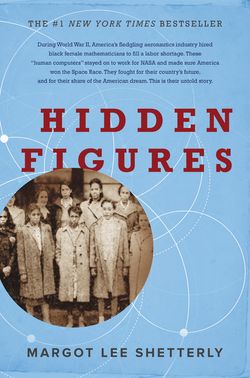 Set against the backdrop of the Jim Crow South and the civil rights movement, Hidden Figures is the never-before-told story of NASA’s African-American female mathematicians who played a crucial role in America’s space program—and whose contributions have been unheralded, until now.

Before John Glenn orbited the Earth or Neil Armstrong walked on the moon, a group of professionals worked as “Human Computers,” calculating the flight paths that would enable these historic achievements. Among these were a coterie of bright, talented African-American women. Segregated from their white counterparts by Jim Crow laws, these “colored computers,” as they were known, used slide rules, adding machines, and pencil and paper to support America’s fledgling aeronautics industry, and helped write the equations that would launch rockets, and astronauts, into space.

Margot Lee Shetterly grew up in Hampton, Virginia, where she knew many of the women in her book Hidden Figures. She is an Alfred P. Sloan Foundation Fellow and the recipient of a Virginia Foundation for the Humanities grant for her research on women in computing. She lives in Charlottesville, Virginia.

“Meticulous… the depth and detail that are the book’s strength make it an effective, fact-based rudder with which would-be scientists and their allies can stabilize their flights of fancy. This hardworking, earnest book is the perfect foil for the glamour still to come.” - Seattle Times

“Much as Tom Wolfe did in “The Right Stuff”, Shetterly moves gracefully between the women’s lives and the broader sweep of history . . . Shetterly, who grew up in Hampton, blends impressive research with an enormous amount of heart in telling these stories - Boston Globe

“Restoring the truth about individuals who were at once black, women and astounding mathematicians, in a world that was constructed to stymie them at every step, is no easy task. Shetterly does it with the depth and detail of a skilled historian and the narrative aplomb of a masterful storyteller.” - Bookreporter.com