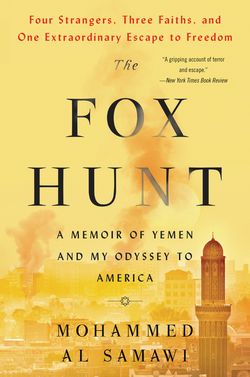 A Memoir of Yemen and My Odyssey to America

March 2015. Four Millennials stare at their iPhones. They’ve been glued to Facebook, Twitter, Whatsapp, and Skype for the past six hours. But they’re not posting vacation photos, watching cat videos, or reviewing local brunch spots. They’re orchestrating a daredevil rescue operation taking place halfway across the world. Within thirty minutes, they’ll learn if they’ve saved the life of a young Muslim-Yemeni peace activist-or if he’s been shot, execution-style, by Al Qaeda operatives. His name is Mohammed Al Samawi, and his story is remarkable.

The Fox Hunt is the first-person story of a young Muslim man from Yemen who, with the help of a group of largely Jewish activists on social media, engineered a harrowing escape from the Yemeni Civil War.

Mohammed Al Samawi was born in 1986 in Yemen. In his midtwenties, he became involved in interfaith groups promoting dialogue between Muslims, Christians, and Jews. In 2015, during the Yemeni Civil War, he fled from Aden to the United States. Since his entry to the United States, he has worked for several NGOs that promote peace and religious tolerance.

“An urgent and timely book that reminds us of the common threads of the human experience.” - Bruce Feiler, bestselling author of Walking the Bible and Abraham

“Poignant, captivating, disturbing, yet, in the end, hopeful, The Fox Hunt is a haunting and memorable book that illuminates the humanitarian tragedy of Yemen through the life of one of its refugees.” - Rabbi David Saperstein, former US Ambassador-at-Large for International Religious Freedom

“This debut memoir is engaging and tragic yet full of hope as a worldwide effort is undertaken to save Al Samawi’s life. A triumphant work.” - Library Journal (starred review)

“Nail-bitingly suspenseful. ... Al Samawi’s ultimate escape is inspiring, as is his determination to continue to work for international peace and understanding. Illuminating and essential reading.” - Booklist, starred review

“Driving social change in the Arab world is a high stakes game, and Mohammed Al Samawi gambles with his life. A memoir wrapped in a thriller, THE FOX HUNT is one of those rare stories that’s as gripping as it is important.” - BASSEM YOUSSEF, author of Revolution for Dummies and “The Jon Stewart of the Arabic World”

“Compelling. … Powerful. … An important story to tell. Gracious and generous, this personal account of a remarkable life is a reminder of how peace comes in small increments as the result of the work of committed individuals.” - Kirkus Reviews

“Highly readable. ... At a time when our nation, out of our own fear and ignorance, is turning away those who would be among our finest citizens, if only we let them, it’s important to remember the world still desperately looks to us for freedom.” - Chicago Sun-Times