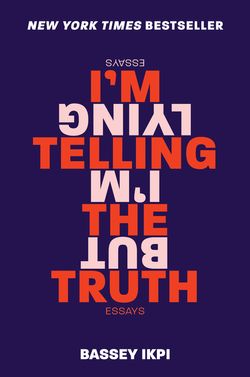 In I’m Telling the Truth, but I’m Lying Bassey Ikpi explores her life—as a Nigerian-American immigrant, a black woman, a slam poet, a mother, a daughter, an artist—through the lens of her mental health and diagnosis of bipolar II and anxiety. Her remarkable memoir in essays implodes our preconceptions of the mind and normalcy as Bassey bares her own truths and lies for us all to behold with radical honesty and brutal intimacy.

"We will not think or talk about mental health or normalcy the same after reading this momentous art object moonlighting as a colossal collection of essays.”     —Kiese Laymon, author of Heavy

From her early childhood in Nigeria through her adolescence in Oklahoma, Bassey Ikpi lived with a tumult of emotions, cycling between extreme euphoria and deep depression—sometimes within the course of a single day. By the time she was in her early twenties, Bassey was a spoken word artist and traveling with HBO's Def Poetry Jam, channeling her life into art. But beneath the façade of the confident performer, Bassey's mental health was in a precipitous decline, culminating in a breakdown that resulted in hospitalization and a diagnosis of Bipolar II.

In I'm Telling the Truth, But I'm Lying, Bassey Ikpi breaks open our understanding of mental health by giving us intimate access to her own. Exploring shame, confusion, medication, and family in the process, Bassey looks at how mental health impacts every aspect of our lives—how we appear to others, and more importantly to ourselves—and challenges our preconception about what it means to be "normal."  Viscerally raw and honest, the result is an exploration of the stories we tell ourselves to make sense of who we are—and the ways, as honest as we try to be, each of these stories can also be a lie.

“As phrases that can stop and startle you, here’s just one. ‘My mother loves and hates and heals and hurts with the same hands.’ The noted spoken word artist has written a book of essays that perform a memoir…. Thanks for writing this.” — Scott Simon, NPR

“Ikpi is not the first to write about mental illness, but I can’t say I’ve ever read a narrative about it like this… her writing is yes, poetic and lyrical with tenderness and thoughtfulness but also funny. She’s just so damn funny and her wit often makes her essays as humorous as they are heartbreaking…. You want to root for her well being. You want to be more understanding of others. And, for some of us, by the end of I’m Telling The Truth, but I’m Lying, you might find yourself realizing you are no less guilty of telling yourself certain stories in order to deal with trauma, secrets, and shame.” — Michael Arceneaux, Essence

“Bassey Ikpi is a human miracle and I want to scream my joy from the rooftops that we are allowed to experience her journey (as an artist, as a black woman, as a black woman dealing with mental illness!) in her gorgeous book.” — Samantha Irby, author of We Are Never Meeting in Real Life and Meaty

“The writing in I’m Telling the Truth, But I’m Lying is wholly sincere and consistently slanted. That’s so hard to pull off. No writer in the country does as much with short soulful sentences as Bassey Ikpi.  We will not think or talk about mental health or normalcy the same after reading this momentous art object moonlighting as a colossal collection of essays.” — Kiese Laymon, author of Heavy

“An intimate, extraordinary book that should transform the way we consider and talk about mental health. Bassey Ikpi’s essays, in all their brutal honesty, throb with power and grace—I defy anyone to read her work without being changed.” — Nicole Chung, author of All You Can Ever Know

“Filled with lines, paragraphs and passages that both intrigue and shock… in essence, the collection paints a personal picture of the normalcy of mental illness… using visceral snapshots of memories from [Ikpi’s] childhood to her adult years.” — People.com

“I’m Telling the Truth, but I’m Lying is a richness of layers, rewarding the reader no matter which particular thread got you here: the experience of being African-born and raised in America, the coming up of a gifted writer and performer, tracing the lineage of mental illness through several generations, or the fleshing out of the literal highs and lows of bipolar II. Like kudzu, symptoms blossom and lace themselves through Ikpi’s accomplishments and griefs, strangulating her from life’s sustenance (food, friends, sleep). Her vivid, heart-racing chapters on the living, breathing moments of bipolar, particularly ‘This is What Happens,’ will be assigned in coursework for years to come. Bassey Ikpi’s writing is a revelation, a thrill, devastating and uproarious, lively in its accurate depiction of the lack of boundaries between the terrible and the hilarious. I’m Telling the Truth is a feat, and will soon be the favorite book of many. It is already one of mine.” — Tarana Burke, Founder of the Me Too Movement

“This mind-bending collection of essays will change the way you look at mental illness, as Ikpi struggles to explain what it feels like when your brain starts malfunctioning. It will call into question how reliably any of us can trust our own stories, and challenge readers to embrace radical honesty.”  — Good Housekeeping

“For over a decade, Bassey Ikpi has been a vital voice for those of us living with neurodivergence. Her words and work have been there through some of our darkest moments, whispering for us to allow ourselves morning, and her debut collection I’m Telling the Truth, but I’m Lying gathers a lifetime of experience into a searing body of work. These true stories will engulf you, wring your heart out, and fill your chest with light. The writing is blade-sharp, precise and evocative, brilliant and graceful as it articulates an embodiment that has been both misrepresented and left unseen in our culture for far too long. Bassey is a storyteller to her bones and it shows. Read this book. Tell everyone you know to read this book. You have no idea how many people out there need these words.” — Akwaeke Emezi, author of Freshwater

“Bassey Ikpi articulates the weightlessness and bodylessness of vulnerability and neuroses and depression with the ease of a fog sifting through the sky. I’m Telling the Truth, but I’m Lying will shatter you, sure. Probably. Definitely. But Bassey is so gifted, so real, so magic that you won’t even bother asking for glue.” — Damon Young, author of What Doesn’t Kill You Makes You Blacker

“I read the first half… in a day and sobbed with recognition…. There were nuanced descriptions about childhood and family dynamics that I didn’t think anyone else had experienced. A wonderful exploration of the stories we tell ourselves to make sense of who we are.” — A Cup of Jo

“I’ve long known Bassey Ikpi to be a writer of great talent, but I am blown away by what she has accomplished with I’m Telling the Truth, but I’m Lying. In this impeccable collection of essays, Bassey writes about such difficult subject matter with gorgeous prose, effortless wit, a searing level of honesty and vulnerability coupled with a level of self-awareness you yearn for from compelling memoirists. Bassey’s work has always felt like haven, but she has outdone herself with this stunning debut. So many will be better for it.” — Michael Arceneaux, author of I Can’t Date Jesus

“Lyrical and gritty and revelatory. “ — Caroline Kepnes, author of You and Hidden Bodies

“Ikpi debuts an essay collection that takes readers on a journey from Nigeria to Stillwater, OK, to Brooklyn; from childhood to adulthood; from the depression and mania of bipolar II disorder and mental breakdown to the beginning of stability. The writings are intimate, intense, and sometimes harrowing and claustrophobic…. Ikpi’s writing is poetic. It skips, batters, sinks, soars, and flows according to events and the state of her mental health. Visceral and unsettling, these essays will not easily be forgotten. A must-read.” — Library Journal, starred review

“Highly anticipated, this collection is raw, courageous, and unsettling…. Haunting and affirming.” — Booklist

“Fraught memories are interrogated and reconstructed in these essays… candidly conveying how one woman faced and overcame her demons.” — Publishers Weekly

“Bassey Ikpi writes about the alienating effects of her mental health struggles…. Readers interested in the subject will love her brave and honest approach to this book.” — Bookish