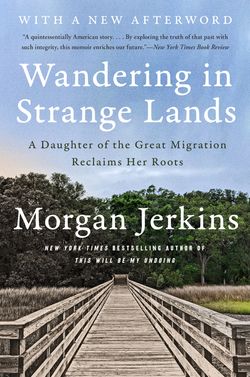 A Daughter of the Great Migration Reclaims Her Roots

“One of the smartest young writers of her generation.”—Book Riot

Now in paperback and featuring a new afterword from the author, comes Morgan Jerkins' powerful story of her journey to understand her northern and southern roots, the Great Migration, and the displacement of black people across America.

Between 1916 and 1970, six million black Americans left their rural homes in the South for jobs in cities in the North, West, and Midwest in a movement known as The Great Migration. But while this event transformed the complexion of America and provided black people with new economic opportunities, it also disconnected them from their roots, their land, and their sense of identity, argues Morgan Jerkins. In this fascinating and deeply personal exploration, she recreates her ancestors’ journeys across America, following the migratory routes they took from Georgia and South Carolina to Louisiana, Oklahoma, and California.

Following in their footsteps, Jerkins seeks to understand not only her own past, but the lineage of an entire group of people who have been displaced, disenfranchised, and disrespected throughout our history. Through interviews, photos, and hundreds of pages of transcription, Jerkins braids the loose threads of her family’s oral histories, which she was able to trace back 300 years, with the insights and recollections of black people she met along the way—the tissue of black myths, customs, and blood that connect the bones of American history.

Incisive and illuminating, Wandering in Strange Lands is a timely and enthralling look at America’s past and present, one family’s legacy, and a young black woman’s life, filtered through her sharp and curious eyes.

Morgan Jerkins is the author of Wandering in Strange Lands and the New York Times bestseller This Will Be My Undoing and a Senior Culture Editor at ESPN’s The Undefeated. Jerkins is a visiting professor at Columbia University and a Forbes 30 Under 30 leader in media, and her short-form work has been featured in the New Yorker, the New York Times, the Atlantic, Rolling Stone, Elle, Esquire, and the Guardian, among many other outlets. She is based in Harlem.

“Wandering in Strange Lands is in many ways a quintessentially American story. . . Jerkins makes plain that denying space for Black identities in history is itself a legacy as American as its original sins of racism and enslavement. By exploring the truth of that past with such integrity, this memoir enriches our future." - New York Times Book Review

"Jerkins weaves a vivid and painful backstory of Black people forced into enslavement in the American South. . .The book is filled with poignant examples from across multiple centuries, including those retold in classrooms and those relegated to forgotten parts of our country's consciousness. . .It's when Jerkins sews her familial threads with those poignant historical facts from deep in the archives of America that the book is most impactful. Equally heartbreaking and reaffirming are the trials and tribulations too many Black people in the United States have faced and somehow conquered, coming out more resilient on the other side." - USA Today

"Wandering in Strange Lands intertwines segments of past and present travel, as a reminder that the past is present in the U.S." - O, the Oprah Magazine

"The mass migration of 6 million Black Americans from the rural South to the North, West, and Midwest is given a deeply personal framing by writer Morgan Jerkins as she attempts to better understand her ancestors’ treacherous journey across America." - Vogue

"Traveling throughout the country, [Jerkins] explores the path her family took as well as her cultural identity as a black woman. Her desire to understand both her personal and cultural origins will inspire you to do the same." - Elle

"Morgan Jerkins has always been curious about her family tree and the roots of Black Americans. In 'Wandering in Strange Lands,' she traces her ancestry back 300 years and shares what she learned about the Great Migration, displacement, and disenfranchisement. The result is an eye-opening, well-researched portrait of Black life in America after slavery." - Hello Giggles

"Wandering in Strange Lands is a timely and riveting story about the Black American experience as told by a writer seeking to reclaim her roots by retracing her family's journey." - PopSugar

"Morgan Jerkins, author of the best-selling and acclaimed This Will Be My Undoing, sets out to discover her family’s roots in Wandering in Strange Lands. In doing so she paints a larger portrait of African American displacement and disenfranchisement during the Great Migration and its impact on her own life. . . Jerkins is a wonderfully articulate memoirist and critic as she shares her own quest to understand the hard truths and actions of her ancestors. . .Wandering in Strange Lands is revelatory, shocking, and affirming." - Al Woodworth, Amazon Book Review

"In Wandering in Strange Lands, Jerkins mixes reportage with personal reflection, taking readers through Southern spaces not often given visibility by those inhabiting or those who built the towns because they’ve since seen another type of colonization. Connecting her present with her past and investigating the ways DNA for Black people is not secular but spans many regions in the United States, Jerkins delves into a family history she didn’t understand but brings herself, and us, closer to." - Electric Literature

"Jerkins evades [the sophomore] slump with the release of her second book, [Wandering in Strange Lands] penning beautiful prose that is engaging, thought-provoking, and authentic. Following the release of her 2018 New York Times bestseller, This Will Be My Undoing, Jerkins hits another home run and leaves her readers asking new questions about the world in which we live." - Ms. Magazine

"For fans of “The 1619 Project,” The New York Times Magazine’s series that recently reexamined the legacy of slavery in the United States, this book is an interesting companion piece. For a long time, Jerkins’ family chose to look forward, not back. But what she found when she finally did retrace their steps was her true self. It had not been forgotten; it was just waiting to be discovered." - Bust Magazine

“[A] forthright and informative account. . . . Jerkins’s careful research and revelatory conversations with historians, activists, and genealogists result in a disturbing yet ultimately empowering chronicle of the African-American experience. Readers will be moved by this brave and inquisitive book.”  - Publishers Weekly

“A thrilling, emotional, and engaging ride that almost commands the reader to turn the page, Wandering in Strange Lands is required reading, accurately widening the lens of American history.” - Booklist (starred review)

"A blend of reportage and memoir, this is just one story of many of this time—and one not to miss when it comes out." - Book Riot

“Driven by a need to understand her own identity, cultural critic Jerkins mounted an investigation into her family's tangled history, recounting in this candid memoir the surprising discoveries that emerged from her emotional journey. . . A revelatory exploration of the meaning of blackness.” - Kirkus Reviews