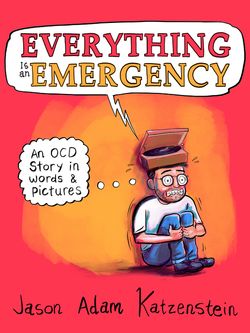 Everything Is an Emergency

An OCD Story in Words & Pictures

“A brilliant, honest, necessary book that exposes the intricacies of the human brain while showing us the way creativity and friendship can anchor us. This is a must-read for anyone who has ever wondered if they see the world a little differently.” –Ada Limón

Jason Adam Katzenstein is just trying to live his life, but he keeps getting sidetracked by his over-active, anxious brain. Mundane events like shaking hands or sharing a drink snowball into absolute catastrophes. Jason has Obsessive Compulsive Disorder, a mental illness that compels him to perform rituals in order to protect himself from dangers that don’t really exist. He checks, washes, over-thinks, rinse, repeat.

He does his best to hide his embarrassing compulsions, and sometimes this even works. He grows up, worries about his first kiss, falls in love with making cartoons, moves to New York City — which is magical and gross, etc. All the while, half his energy goes into living his life, while the other half is devoted to the increasingly ridiculous rituals he’s decided to maintain to keep himself from fully short-circuiting,

Then, he fully short-circuits.

At his absolute lowest, Jason finally decides to do the things he’s always been told to do to get better: exposure therapy and medication. These are the things that have always freaked him out, and they continue to freak him out. Also, they help him recover.

Everything is an Emergency is a comic about all the self-destructive stories someone tells himself, over and over, until they start to seem true. In images surreal, witty, and confessional, Jason shows us that OCD can be funny, even when it feels like it’s ruining your life.

Author
JASON ADAM KATZENSTEIN is a cartoonist and writer for print and television. His work has appeared in The New Yorker, the New York Times and MAD Magazine, and on Cartoon Network. He is the illustrator of The White Man's Guide to White Male Writers of the Western Canon and the graphic novel Camp Midnight. He is also a visiting professor at Wesleyan University.
Reviews

"Everything Is an Emergency is a guided tour into a disordered mind, and the book is an education for anyone not sure what a serious case of O.C.D. does to a person. And even those not afflicted may find their own comfort in one of Katzenstein's epiphanies: 'Find the seconds that feel OK and live in them.'" — New York Times Book Review

“This book undid me in all the best ways. Everything is an Emergency is a brilliant, honest, necessary book that exposes the intricacies of the human brain while showing us the way creativity and friendship can anchor us. This is a must-read for anyone who has ever wondered if they see the world a little differently.” — Ada Limón, poet and author of National Book Award finalist Bright Dead Things

"This deep dive into difficult territory ranges from Munch-like terror to the smiling rock of rock-bottom to the funniest group therapy scene I ever saw. You don't have to have OCD to love this book. You could just love the funny, the dark and the true. I did." — Amy Bloom, author of White Houses

"Everything Is An Emergency broke my heart and then put it back together!“ — Shelby Lorman, author of Awards for Good Boys