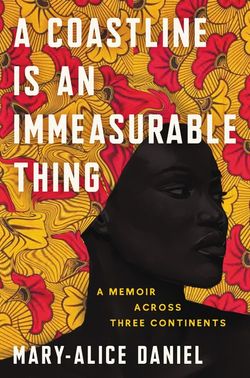 A Coastline Is an Immeasurable Thing

A Memoir Across Three Continents

A poetic coming-of-age memoir that probes the legacies and myths of family, race, and religion—from Nigeria to England to America

Mary-Alice Daniel’s family moved from West Africa to England when she was a very young girl, leaving behind the vivid culture of her native land in the Nigerian savanna. They arrived to a blanched, cold world of prim suburbs and unfamiliar customs. So began her family’s series of travels across three continents in search of places of belonging.

A Coastline Is an Immeasurable Thing ventures through the physical and mythical landscapes of Daniel’s upbringing. Against the backdrop of a migratory adolescence, she reckons with race, religious conflict, culture clash, and a multiplicity of possible identities. Daniel lays bare the lives and legends of her parents and past generations, unearthing the tribal mythologies that shaped her kin and her own way of being in the world. The impossible question of which tribe to claim as her own is one she has long struggled with: the Nigerian government recognizes her as Longuda, her father’s tribe; according to matrilineal tradition, Daniel belongs to her mother’s tribe, the nomadic Fulani; and the language she grew up speaking is that of the Hausa tribe. But her strongest emotional connection is to her adopted home: California, the final place she reveals to readers through its spellbinding history.

Daniel’s approach is deeply personal: in order to reclaim her legacies, she revisits her unsettled childhood and navigates the traditions of her ancestors. Her layered narratives invoke the contrasting spiritualities of her tribes: Islam, Christianity, and magic. A Coastline Is an Immeasurable Thing is a powerful cultural distillation of mythos and ethos, mapping the far-flung corners of the Black diaspora that Daniel inherits and inhabits. Through lyrical observation and deep introspection, she probes the bonds and boundaries of Blackness, from bygone colonial empires to her present home in America.

“Mary-Alice Daniel has created a radiant, multi-faceted, multi-genre narrative. Part myth, magic, memoir, remembrance, and whispered quilt, this book tackles lineage, fear, and difficulty with a hard-won elegance and grace. A powerful debut from a brilliant and gifted writer."  — Chris Abani, author of The Secret History of Las Vegas and Smoking the Bible

"Mary-Alice Daniel's memoir is an introspection on the meaning of home and family and identity and race. Deeply personal, yet so relatable, especially to those who've had to leave a country. In places it brings to mind the best writings of Jhumpa Lahiri. Mary-Alice is a major talent to watch." — Helon Habila, author of Travelers and The Chibok Girls

“Mary-Alice Daniel can make a story shimmer with life; she can make an image leap off the page; she can make you want to read a sentence out loud just so your mouth can feel its sounds. Make room on your bookshelves: a dazzling new voice has arrived.” — Anne Fadiman, author of The Spirit Catches You and You Fall Down and The Wine Lover’s Daughter

"In her incandescent debut, Nigerian poet Daniel recounts her life on three continents, surrounded by stories that made up the fabric of her African upbringing...This is a gem." — Publishers Weekly (starred review)

"Wondrous...One can’t help but be overwhelmed by the exquisiteness of [Daniel’s] prose, which we sense has been pulled from the deepest regions of her heart...Mary-Alice Daniel is an exquisitely elegant young writer.”  — New York Journal of Books