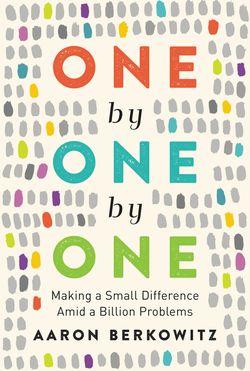 Making a Small Difference Amid a Billion Problems

In the spirit of Tracy Kidder’s Mountains Beyond Mountains, and joining the ranks of works by Bryan Stevenson, Matthew Desmond, Abraham Verghese and Oliver Sachs, the inspiring story of a young American neurologist’s struggle to make a difference in Haiti by treating one patient—a story of social justice, clashing cultures, and what it means to treat strangers as members of our family.

Dr. Aaron Berkowitz had just finished his neurology training when he was sent to Haiti on his first assignment with Partners In Health. There, he meets Janel, a 23-year-old man with the largest brain tumor Berkowitz or any of his neurosurgeon colleagues at Harvard Medical School have ever seen. Determined to live up to Partners In Health’s mission statement “to bring the benefits of modern medical science to those most in need,” Berkowitz tries to save Janel’s life by bringing him back to Boston for a 12-hour surgery.  In One by One by One, Berkowitz traces what he learns and grapples with as a young doctor trying to bridge the gap between one of the world’s richest countries and one of the world’s poorest to make the first big save of his medical career.

As Janel and Berkowitz travel back and forth between the high-tech neurosurgical operating rooms of Harvard’s hospitals and Janel’s dirt-floored hut in rural Haiti, they face countless heart-wrenching twists and turns. Janel remains comatose for months after his surgery. It’s not clear he will recover enough to return to Haiti and be able to survive there. So he goes for a second brain surgery, a third, a fourth. Berkowitz brings the reader to the front lines of global humanitarian work as he struggles to overcome the challenges that arise when well-meaning intentions give rise to unintended consequences, when cultures and belief systems clash, and when it’s not clear what the right thing to do is, let alone the right way to do it.

One by One by One is a gripping account of the triumphs, tragedies, and confusing spaces in between as an idealistic young doctor learns the hard but necessary lessons of living by the Haitian proverb tout moun se moun—every person is a person.

Aaron Berkowitz, MD PhD, is the founding Director of Global Health at Kaiser Permanente Medical School and was the founding Director of the Global Neurology Program at Brigham and Women’s Hospital in Boston and directed the first-year Mind-Brain-Behavior course at Harvard Medical School. As a consultant for Partners In Health and advisor to Doctors Without Borders, Dr. Berkowitz has worked in Haiti, Malawi, Vietnam, and on the Navajo reservation in New Mexico. He lives in Pasadena, CA.

"From the first page onward, One by One by One reads like a medical thriller. The story of trying to save a life against impossible odds will grip you and also fill you with admiration for Aaron Berkowitz. There are not always easy answers or solutions to the clear injustices he describes, but Berkowitz expertly navigates us through the reality of what is possible when fiercely intelligent and kind-hearted altruistic people come together. His heart-felt  book will inspire you to see the world differently and compel you to be a part of that positive change." - Sanjay Gupta MD, Chief Medical Correspondent, CNN, Associate Professor of Neurosurgery, Emory Clinic

“Stirring and acute, this beautifully rendered account of an unforgettable story is filled with honest reflection that will alternately swell and break your heart, only to heal it in the end.” - Dr. Paul Farmer, Kolokotrones University Professor of Global Health and Social Medicine, Harvard Medical School, and Co-founder, Partners In Health

“It is always a pleasure to meet a doctor who practices his profession with love, willing to embrace the wretched complexity which comes with believing that all lives should be valued equally. The stories in One by One by One are absorbing, sometimes harrowing, and told with admirable, unmistakable sincerity." - Tracy Kidder, author of Mountains Beyond Mountains and winner of the Pulitzer Prize

"Berkowitz offers a riveting insider’s look at the ethical dilemmas inherent in humanitarian work. His storytelling is at once urgent and empathetic, a compelling combination that offers readers a thoughtful and honest view of the complexity that unfolds when a young Harvard neurologist brings a Haitian boy to Boston for a life-threatening neurosurgery. The questions in this book will stay with you long after you turn the last page." - Dr. Daniela Lamas, instructor at Harvard Medical School and author of You Can Stop Humming Now: A Doctor's Stories of Life, Death, and In Between

“This story of a great, humane physician, working in the bleakest of settings, is a model of what caregiving at its best can be.” - Dr. Arthur Kleinman, professor of psychiatry and of medical anthropology at Harvard Medical School and author of The Soul of Care and The Illness Narratives

“An important and beautiful book, unsentimental and painfully honest, vivid and clear-eyed, and very smart. For medical relief  workers around the world, it must be required reading—for the rest of us, too.” - Amy Wilentz, author of Farewell Fred Voodoo: A Letter From Haiti (Winner, National Book Critics Circle Award) and The Rainy Season: Haiti Since Duvalier; contributing editor at The Nation

"Confronts the jarring inequities of health care in Haiti and the U.S., and becomes both the deliverer and the delivered. By avoiding the pedestrian recounting of medical heroism in a disadvantaged country, he tells a marvelous and searing tale of hope in hopeless circumstances." - Dr. Allan H. Ropper, Professor of Neurology, Harvard Medical School; author of Reaching Down the Rabbit Hole and How the Brain Lost Its Mind

“A moving account of the challenges and difficulties of helping those in need in other countries—and the ethical dilemmas about whom to help and how. This striking narrative should get us all talking.” - Tanya Luhrmann, professor of anthropology at Stanford University and author of When God Talks Back and Of Two Minds

“One by One by One is an engaging story of what can happen when idealism collides with reality in providing advanced healthcare to the world‘s most vulnerable citizens. Highly recommended for anyone interested in medicine or global health.” - Sandeep Jauhar, author of Heart: A History

"Berkowitz writes movingly as a young neurologist facing the challenges of saving one Haitian’s life. . . . With a novelist’s touch, he tells of the complexities of arranging treatment and of the complications that ensued. [This is] a poignant and unsentimental account by a dedicated doctor doing palpable good." - Kirkus(starred review)

“An honest, moving portrait of the joys, complexities, tragedies, and teamwork Berkowitz encountered while working with patients in [Haiti]. . . . Readers who enjoy books such as Tracy Kidder’s Mountains Beyond Mountains, as well as Atul Gawande’s works, will appreciate this unflinching and inspiring read.” - Library Journal