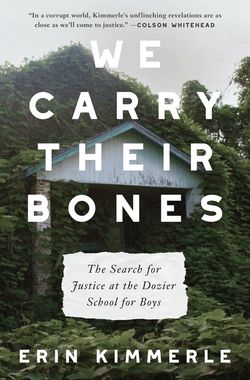 We Carry Their Bones

The Search for Justice at the Dozier School for Boys

"With We Carry Their Bones, Erin Kimmerle continues to unearth the true story of the Dozier School, a tale more frightening than any fiction. In a corrupt world, her unflinching revelations are as close as we'll come to justice." –Colson Whitehead, Pulitzer-Prize Winning author of The Nickel Boys and The Underground Railroad

Forensic anthropologist Erin Kimmerle investigates of the notorious Dozier Boys School—the true story behind the Pulitzer Prize–winning novel The Nickel Boys—and the contentious process to exhume the graves of the boys buried there in order to reunite them with their families.

The Arthur G. Dozier Boys School was a well-guarded secret in Florida for over a century, until reports of cruelty, abuse, and “mysterious” deaths shut the institution down in 2011. Established in 1900, the juvenile reform school accepted children as young as six years of age for crimes as harmless as truancy or trespassing. The boys sent there, many of whom were Black, were subject to brutal abuse, routinely hired out to local farmers by the school’s management as indentured labor, and died either at the school or attempting to escape its brutal conditions.

In the wake of the school’s shutdown, Erin Kimmerle, a leading forensic anthropologist, stepped in to locate the school’s graveyard to determine the number of graves and who was buried there, thus beginning the process of reuniting the boys with their families through forensic and DNA testing. The school’s poorly kept accounting suggested some thirty-one boys were buried in unmarked graves in a remote field on the school’s property. The real number was at least twice that. Kimmerle’s work did not go unnoticed; residents and local law enforcement threatened and harassed her team in their eagerness to control the truth she was uncovering—one she continues to investigate to this day.

We Carry Their Bones is a detailed account of Jim Crow America and an indictment of the reform school system as we know it. It’s also a fascinating dive into the science of forensic anthropology and an important retelling of the extraordinary efforts taken to bring these lost children home to their families—an endeavor that created a political firestorm and a dramatic reckoning with racism and shame in the legacy of America.

Erin Kimmerle, PhD, is an associate professor in the Department of Anthropology at the University of South Florida and executive director of the Florida Institute of Forensic Anthropology and Applied Science at USF. She lives with her two sons outside Tampa, Florida.

"With We Carry Their Bones, Erin Kimmerle continues to unearth the true story of the Dozier School, a tale more frightening than any fiction. In a corrupt world, her unflinching revelations are as close as we'll come to justice." — Colson Whitehead, Pulitzer-Prize Winning author of The Nickel Boys and The Underground Railroad

“Gripping….Kimmerle speaks eloquently to official crimes that have yet to be fully accounted for, giving a closely observed account of forensic investigation along the way. A horrific story of true crime, unjust punishment, and the quest for justice for the victims of a cruel state.” — Kirkus Reviews (starred review)