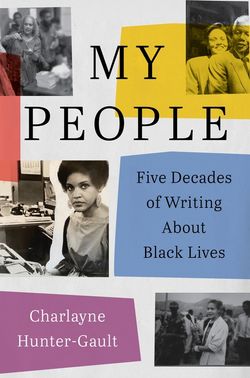 “Charlayne Hunter-Gault is an eminent Dean of American journalism, a vital voice whose work chronicled the civil rights movement and so much of what has transpired since then. My People is the definitive collection of her reportage and commentary. Spanning datelines in the American South, South Africa and points scattered in between, her work constitutes a history of our time as rendered by the pen of a singular and indispensable black woman journalist.”-Jelani Cobb

From the legendary Emmy Award-winning journalist, a collection of ground-breaking reportage from across five decades which vividly chronicles the experience of Black life in America today.

At just eighteen years old,Charlayne Hunter-Gault made national news when she mounted a successful legal challenge that culminated in her admission to the University of Georgia in January 1961—making her one of the first two Black students to integrate the institution. As an adult, Charlayne switched from being the subject of news to covering it, becoming one of its most recognized and acclaimed interpreters.

Over more than five decades, this dedicated reporter charted a course through some of the world’s most respected journalistic institutions, including The New Yorker and the New York Times, where she was often the only Black woman in the newsroom. Throughout her storied career, Charlayne has chronicled the lives of Black people in America—shining a light on their experiences and giving a glimpse into their community as never before. Though she has covered numerous topics and events, observed as a whole, her work reveals the evolving issues at the forefront of Black Americans lives and how many of the same issues continue to persist today.

My People showcases Charlayne’s lifelong commitment to reporting on Black people in their totality, “in ways that are recognizable to themselves.” Spanning from the Civil Rights Movement through the election and inauguration of America’s first Black president and beyond, this invaluable collection shows the breadth and nuance of the Black experience through trials, tragedies, and triumphs and everyday lives.

“[A] powerhouse collection... Whether covering the TV show Black-ish or politics in South Africa, Hunter-Gault employs razor-sharp thinking and a keen journalistic eye. This solidifies her status as one of the greats.” — Publishers Weekly, starred review

“Charlayne Hunter-Gault is a hero of the Civil Rights movement and a brave and glorious writer. In the cause of humanity and clear-eyed reporting, she has always held the banner high.” — David Remnick

“Charlayne Hunter-Gault is an eminent Dean of American journalism, a vital voice whose work chronicled the civil rights movement and so much of what has transpired since then. My People is the definitive collection of her reportage and commentary. Spanning datelines in the American South, South Africa and points scattered in between, her work constitutes a history of our time as rendered by the pen of a singular and indispensable black woman journalist.” — Jelani Cobb

“Charlayne Hunter-Gault is the quintessential eye-witness to the riveting events and fascinating characters of the last half-century’s racial reckoning. In this invaluable collection—informative, vivid, bracing and humane—she reveals the distance traveled and the hard road yet ahead.” — Geraldine Brooks

“Since climbing the marble steps to her first class at UGA, which she integrated in 1961, Charlayne Hunter-Gault has been a front-row observer and reporter of racial turbulence around the world. The pages in this book are a study in Black history—and reiterate her lasting impact on society. Charlayne has the innate ability to make connections, lift voices, and make every one of us—no matter our race, color, creed, or religion—feel that we will break through, together, one day.” — Heather Dunhill, Sarasota Magazine

“Charlayne Hunter-Gault is an absolute gift to this world. She’s one of those unsung female heroines who bravely helped change the landscape in the worlds of civil rights and education. I was able to attend the University of Georgia and pursue a journalism career because of her sacrifice. What an eye opening experience to read her gripping new book, My People, and to fully understand her journey of struggle and triumph. Thank you Charlayne for staying in the fight even when it felt dangerous and uncertain . . . and for eventually claiming your purpose and your joy! I stand on your shoulders as do so many others.” — Deborah Johnson, ABC News Senior National Affairs Correspondent