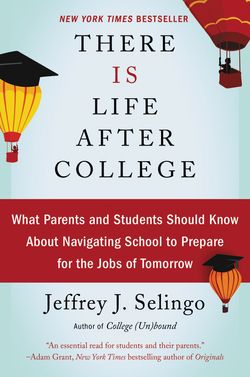 There Is Life After College

Description
Your students and their parents have heard all of the post-college horror stories: they’ll spend the next 10 years trying to find a job with a salary big enough to cover their college loan payments while they remain financially dependent on their parents.  Although this is the bleak outlook college students are told to prepare for, Jeffrey J. Selingo argues that this doesn’t have to be the case. Selingo gives the next generation what they desperately need: detailed advice and new approaches that will help every student, no matter their major or degree, find real employment—a journey that is not linear, but personal and unique.
Author

Jeffrey J. Selingo has written about higher education for two decades. He is a regular contributor to the Washington Post and is the author of two previous books, College (Un)bound and MOOC U. He is the former editor of The Chronicle of Higher Education. His writing has been featured in the New York Times, Wall Street Journal, and Slate, and he has appeared on ABC, CNN, PBS, and NPR. He is a special adviser and professor of practice at Arizona State University and a visiting scholar at the Center for 21st Century Universities at the Georgia Institute of Technology. He lives with his family in Chevy Chase, Maryland.

“Features many valuable stories from his interviews with students who figure out how to thrive in various career trajectories.” - The Atlantic

“An eye-opening exploration of what the future holds for college grads. It’s an essential read for students -- and their parents -- to prepare for launching careers in a radically different job market.” - Adam Grant, Wharton professor and New York Times bestselling author of Give and Take and Originals

“Selingo provides an important road map for navigating the world of higher education. This is an essential guide for learning what to expect from college, and how to prepare for productive employment afterwards. That the book is written in clear, understandable language only adds to its value.” - Janet Napolitano, president of the University of California, former secretary of Homeland Security, and former governor of Arizona

“Jeffrey Selingo’s book belongs on the desk of every career counselor, on the shelf of every parent, and in the hands of every young person planning his or her future. There Is Life After College is essential reading for navigating the new workplace terrain.” - Daniel H. Pink, author of To Sell Is Human and Drive

“Selingo identifies the question we should be worried about: what comes after college? ... An invaluable guide for students who want to make the most of their college years.” - Paul Tough, New York Times bestselling author of How Children Succeed

“Terrific. ... Covers a wide range of pressing issues in higher education from the perspective and for the benefit of students.” - Forbes

“Selingo provides valuable information about what kids really need to know to not just be employable, but to be in a position to know what they want, know how to get there, and succeed once they’ve arrived. I will be planting this book in my teenager’s bookshelf.” - Jessica Lahey, New York Times bestselling author of The Gift of Failure

“Explores several promising experiments that promise to redefine college as we know it.” - USA Today

“A necessary and thoughtful contribution to the conversation on the role our colleges and universities play in preparing students for young adulthood. Everyone who has an interest in the development of today’s college students and tomorrow’s leaders should read it.” - Dan Porterfield, President of Franklin & Marshall College

“Why are so many young adults wandering or straggling in the job market? How can parents help their kids thrive out there? Selingo convincingly frames the 21st century job market as a wholly unfamiliar terrain, then provides comprehensive strategies and tactical tips for tackling it.” - Julie Lythcott-Haims, author of How to Raise an Adult

“Levelheaded advice for students and parents on the best path to take from high school to employment.” - Kirkus Reviews

“Essential reading for high school and college students and their parents. Selingo doesn’t just provide the answers, he makes sure his readers know the important questions to ask. Students looking for a roadmap to the future should get this book and heed its advice.” - Patricia Rose, Director of Career Services, University of Pennsylvania

“In an age when jobs and career paths are likely to shift -- and even evaporate entirely -- at an unprecedented pace, Jeffrey Selingo’s There Is Life After College offers a practical road map for graduates faced with navigating a challenging and unpredictable terrain.” - Martin Ford, author of Rise of the Robots: Technology and the Threat of a Jobless Future

“Bursting with fresh ideas and vivid examples. ... The breadth and depth of Selingo’s expertise make him a uniquely good guide to what’s undeniably a complicated topic.” - EdSurge

“Jeffrey Selingo digs deep into what frustrated employers have known for quite some time: to fuel the economy with the next generation of leaders and innovators, we need grads who ask questions, have the grit of determination and can make quick, thoughtful decisions in ambiguous situations. A must read.” - Edward B. Rust, Jr., Chairman of the Board, State Farm Mutual Automobile Insurance Company