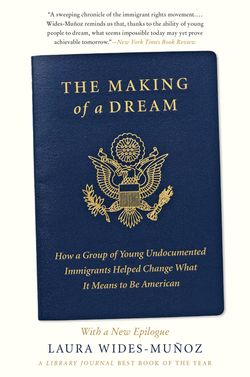 The Making of a Dream

They call themselves the DREAMers: young people who were brought, or sent, to the United States as children and who, until recently, lived in this country without any legal status until the passing of DACA, commonly known as the Dream Act. Before the end of his second term, President Barack Obama's efforts on immigration had been stalled by lawsuits-and yet still there had been the most significant shift in U.S. immigration policy in at least a quarter of a century, and an equally seismic shift in public opinion on one of the most controversial issues of our times.

The Making of a Dream is the story of a group of young people and how they helped shape these major shifts in national policy and public opinion. It begins at the turn of the millennium, with the first of a series of so-called "Dream Act" proposals; follows the efforts of policy makers, activists, and the undocumented themselves, and concludes with the 2016 presidential election and the first months of the Trump presidency. Along the way, the Dreamers' story intersects with the watershed political and economic events of the last two decades: 9/11, the recession, the wars in Iraq and Afghanistan, the Obama presidency, and the rebirth of the anti-immigrant right.

Laura Wides-Muñoz ​is the author of The Making of a Dream: How a Group of Young Undocumented Immigrants Helped Change What it Means to be American, based on more than a decade of reporting on immigration, much of it done while a staff writer for The Associated Press.

Previously, she served as Vice President for Special Projects & Editorial Strategy at Univision’s English-language Fusion Network, and as a senior story editor for the network's TV and digital investigative teams.

Laura has reported from Cuba and throughout Central America and has written for The Miami Herald, The Washington Post, and the Los Angeles Times, among other outlets. She has won the Associated Press Managing Editors Award and multiple Society of Professional Journalists awards.

​The Making of a Dream is her first published book. She conceived of the project during a 2013 Harvard University Nieman Foundation for Journalism fellowship. She lives in Washington, D.C. with her family.

“Poignant… An eye-opening exploration of the DREAM Act and those who have tried to find safe harbor in the United States under its aegis. A well-crafted, timely contribution to the immigration debate.” — Kirkus Reviews

“Deeply reported, empathetic, and beautiful, The Making of a Dream is the definitive account of the moral drama that created a new group of Americans and empowered them to call on their country to live up to its ideals.” — Alexis Madrigal, staff writer at the Atlantic

“This inspiring, well-written, well-documented account is an important read for Americans on all sides of this lingering issue.” — Library Journal

“Wides-Muñoz movingly traces the 12 years of attempted legislation and political activism that culminated in the DREAM Act… This is a timely look at a contentious issue.” — Publishers Weekly

“A sweeping chronicle of the immigrant rights movement… Wides-Muñoz expertly describes the broader reform movement, through vivid thumbnail portraits of key students… Wides-Muñoz reminds us that thanks to the ability of young people to dream, what seems impossible today may yet prove achievable tomorrow.” — Helen Thorpe, New York Times Book Review

“An intimate look at the complicated lives and remarkable aspirations--thwarted and fulfilled--of people searching for a way out of a peculiar historical trap. The Making of a Dream is, in turns, inspiring, heartbreaking, hopeful, and maddening…just as it must be.” — Ray Suarez, author ofLatino Americans: The 500-Year Legacy That Shaped a Nation

“Powerful. Evocative and illuminating. A deeply empathetic look at those caught between two worlds and who risk losing everything in a time of deceitful political rhetoric. Read it.” — Alfredo Corchado, author of Midnight in Mexico: A Reporter’s Journey Through a Country’s Descent into Darkness

“A necessary and exciting book about five young people whose dreams and struggles are interwoven with this country’s best hopes for itself. This is also the story of the legislators, activists, and ordinary citizens who stand behind them, and of the very slow grinding of the wheels of justice.” — Alma Guillermoprieto, author of Dancing with Cuba: a Memoir of the Revolution

“Essential… A valuable and detailed look at lawmaking and policy that affect people and communities across the nation as well as portraits of heroic youth willing to put their own status in jeopardy to advocate for fair treatment, not only for themselves and their families but for all immigrants.” — Booklist

“Wides-Muñoz probes deep into the dreamers’ relationships with their parents and often finds empathy and concern.” — Washington Post