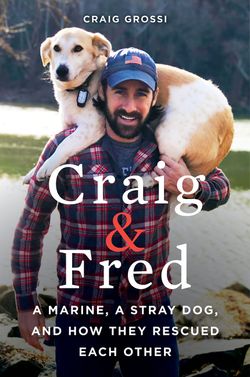 A Marine, A Stray Dog, and How They Rescued Each Other

In 2010, Sergeant Craig Grossi was doing intelligence work for Marine RECON, the most elite fighters in the Corps, in a remote part of Afghanistan. While on patrol, he spotted a young dog “with a big goofy head and little legs” who didn’t seem vicious or run in a pack like most strays they’d encountered. After eating a piece of beef jerky Craig offered—against military regulations—the dog began to follow him. “Looks like you made a friend,” another Marine yelled. Grossi heard, “Looks like a ‘Fred.’” The name stuck, and a life-changing friendship was forged.

Months later, when Craig returned to the U.S., it was Fred’s turn to save the wounded Marine from Post-Traumatic Stress. Today, Craig and Fred are touching lives nationwide, from a swampy campground in a Louisiana State Park to the streets of Portland, Oregon, and everywhere in between.

Raised in the Virginia suburbs of Washington, DC, Craig Grossi is a Marine Corps veteran, recipient of the Purple Heart and Georgetown University graduate. When not travelling with Fred, he devotes his time to veteran organizations including the USA Warriors Ice Hockey Program and other nonprofits that benefit dogs and veterans. He now lives in Maine with his partner Nora, and their dogs Fred and Ruby.

You can find them online at www.fredtheafghan.com.